Our 36TH Year Tradition of Service to Our W & L & VMI Parents  has included our invitation to the their students to join them for our legendary breakfasts at the Lodge as our guests.

Lodge Guests visiting the colleges, find the delightful 2 minute drive to both campuses and admission houses, veryconvenient. We will get you started with Blue Ribbon breakfast and keep you on time for your campus tour or other appointment. The two colleges, Washington and Lee University - c 1749, and Virginia Military Institute founded 1839 have beautiful adjoining campuses and both are steeped in history.

Home Away From Home!

I came to stay with John for a night while visiting Washington & Lee School of Law. I had never been to the area before and as a 22 year old on my own, it was such a relief to be staying with someone who not only took me under his wing and made me feel comfortable, but also took the time to tell me the ins and outs of Lexington.

Washington & Lee University was originally founded as Augusta Academy in 1749, 20 miles awayfrom the current campus, making it the 9th oldest U.S. university. The campus was moved to Lexington in 1776 and renamed Liberty Hall Academy. The school ran into financial trouble in the 1790's and luckily General  George Washington stepped in to provide the school's 1st endowment of $20,000 in James River Canal Stock which kept the school in operation. In 1813 the newly named  private all male Washington College was holding class where the current campus is today.

Confederate General Robert E. Lee came to Lexington 1865 after the Civil War to become President of the university.  The college had $67 in its checking account at this time. His goal was to do ''all in his power to aid in the restoration of peace and harmony'' in the South.  General Lee served as President until his death in 1870. The school name was changed to Washington & Lee University . The school went co-ed in 1985, today there are over  1800 undergrads. An additional 400 attend the Washington & Lee University School of Law. the Lee Chapel  and Museum on the Colannade where General Lee is buried is free to the public, Lee's office is on display just as he left it.

Distances to Other Colleges

VMI, the nation's oldest state supported school. was founded in 1839. The post joins the Washington and Lee University campus in town. It is one of six military schools in the country and the current enrollment is  right at1500 cadets. Confederate General Thomas ''Stonewall'' Jackson taught there prior to the Civil War.  World War II General George C. Marshall was a VMI and the Marshall museum on post honors him and is open to the public. The VMI Museum is also on post and has many exhibits that cover the history of the school. ''Stonewall'' Jackson's horse Little Sorell is on mounted display along with the rain jacket the General  wore on the night he was shot. A very impressive antique gun collection can be found on the second floor down from the chapel level. Full Dress parades are always a favorite with guests as the Corp of Cadets march through the huge Parade ground. These are free to the public and they are scheduled on many Friday afternoons and other special occasions when school is in session August-May. 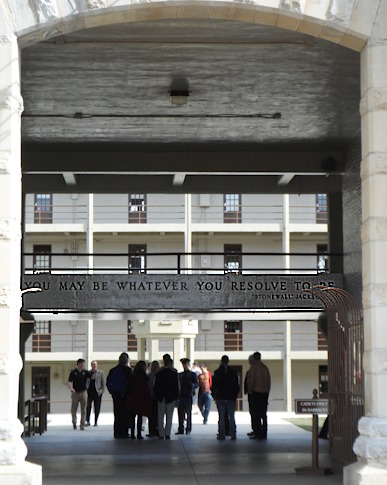 This independent liberal arts college is 6 miles east of Lexington in Buena Vista, Va. The student enrollment is around 800.